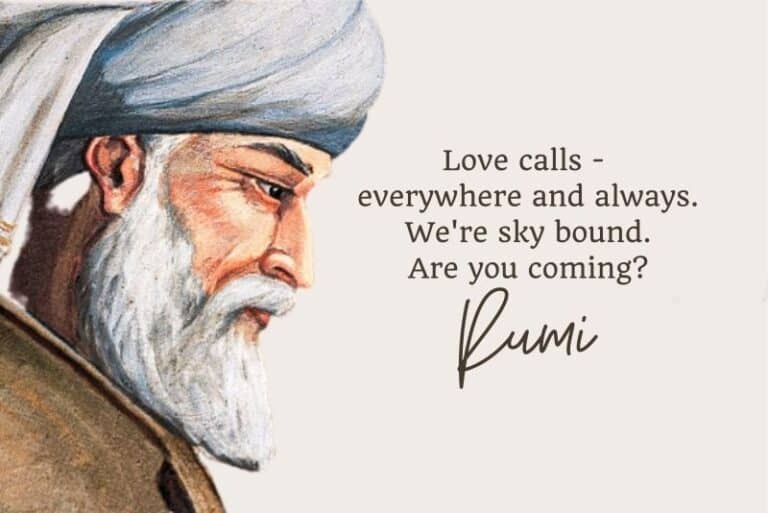 Hz. Mevlana was born in 1207 in the city of Belh. Bahaeddin Veled, whose father is known as Sultan-ul-Ulema, is Mumine Hatun. After leaving Belh with his family, Bahaeddin Veled went to Baghdad, then to Mecca for Hajj, and later came to Larende (today’s Karaman) during the most glorious times of the Anatolian Seljuks.

Bahaeddin Veled died in 1231. Hz. Mevlana followed one of his father’s disciples, Muhakkık-i Tirmidhi, for 9 years (1232-1241). In some sources, St. It is said that Mevlana went to Damascus to further his education. When he met Shams-i Tabrizi in 1244, Hz. Mevlana’s life changed and he became a man of heart besides his knowledge. Neglecting those around him because of the conversations he had with Şems-i Tabrizi, Hz. Mevlana faced the reaction of his followers and the people. As a result, Shams-i Tabrizi went to Damascus in 1246. However, Upon Mevlana’s insistent invitations, he returned to Konya after 9 months. Shams-i Tabrizi mysteriously disappeared in 1247 as a result of the ongoing reactions. After this event, Mevlana devoted himself entirely to poetry, to the sky and to the spiritual maturation of those around him. Later, he chose Selahaddin Zerkubi and Hüsameddin Çelebi as his chat partner, respectively. Hz. Mevlana died in 1273 in Konya.

Sufism or mysticism, which is mostly accepted as the mystical dimension of Islam, is described as a way of purifying the personality of the person from bad habits, purifying the soul, and becoming mature (Mapleton) with the love of Allah. Sufism is a way of life; It’s a different view on life. Sects, on the other hand, are institutionalized phenomena stemming from Sufism. It’s like the relationship between ice and water. Ice was formed from water; but it is the solidified, frozen state of water. The analogy of “the ocean and a jug of water” explains the relationship between Sufism and Sects very well: Even if you take water from the ocean and fill it into the jug, how long does the water in the jug retain its oceanic character? (Hazret Inayat Khan, Hazrat Mevlana).

There are many known Sufi orders in the Islamic world. The most well-known of these is Mevlevi, with its Ottoman name Mevlevi. After the death of Mevlana in 1273, the Mevlevi order was founded by his son, Sultan Veled, around his father’s thoughts. Since he systematized his father’s thoughts and organized them in the form of a sect, Mevlana’s son is considered the main founder and second piri of the Mevlevi order.

Mevlevi; As the most institutionalized sect during the Ottoman Empire, it continued to exist until Atatürk closed the sects and zaviyes in 1923. The culture of Mevlevi and the most important ritual of this culture, the Sema Ritual, is evaluated as a cultural heritage by universities, foundations and associations and is taught to be passed on to future generations and continues its existence with various activities. The Mevlevi Sema Ceremony was accepted as a part of the World Cultural Heritage by UNESCO in 2005 and is one of the most important riches of Turkish culture as an 800-year-old tradition.

Mevlevi; It is an institution founded entirely on love and tolerance. Hazrat Mevlana is a love-spirit who gives his heart to the Creator, teaches us to love all creatures in the world because of their Creator, and to talk about love to us.

—– If you pour the sea into a pitcher, how much does it take? The fate of a day.

—– “Fall in love, in love, choose love and you will be the chosen one.” he calls.

—– To be mortal in God through his own existence; In other words, having a full heart to Allah is the shortest way to Allah. A person who has given his heart to God no longer has his own self. It is Allah who works from every particle of it. Thus, that person does not do bad deeds that will harm others by following his nafs. He is imbued with the morality of God. Hz. Muhammad and Hz. Mevlana set an example for us with these qualities.

—– Mevlana is a limitless being that does not fit into the world. It is the divine voice that gives good news to those who seek beauty, truth, goodness, love and truth. It is the Rahmani seda who offers consolation to those who are persecuted. It is the devalued breath that heals those who groan from separation. He teaches man to man. He is the one who teaches that everything is in man and that the entire universe is under his command.

—– Mevlana is a great lover of Rights. He is the master of love. Lost in love. It is love itself. For those who ask what love is; “Be like me and know; Whether it is light or darkness, unless it is, you cannot know it completely.” commands.

—– Mevlâna Celaleddin-i Rumi, who gives a brand new message to human thought, presents the ideas and systems of Islamic thinkers and creeds of belief within the triangle of spirit, mind and love, opens new horizons by adding excitement to humanity on the path of morality, religion, science and reason, is an exceptionally sublime being. is a divine light, a spiritual sun. His greatest message to human thought is “love, love and unity”.

—– He enthused the hearts as a saint, washed the human mind, who was a master and a mentor, with light, saved the minds and hearts from dirt and duality, and cleansed them.

—– He does not deny anything, but unites, integrates and endears everything. He does not see anyone apart; because he knows that everything is the emergence and manifestation of Allah and reflects this in his heart and human mind as a state.

—– Mevlana is a saintly and exalted master. It is a system by itself, a life and order. It is a state monument that teaches greatness with its morals, knowledge, wisdom, love, mind, attitude, perception, behavior and everything. The real representative of the Prophet is the highest element and reality of love and intelligence.

—– “Man is the most honorable of creation.” with his motto; Embracing people of all languages, religions and colors, Hz. Mevlana is the symbol of love, peace, brotherhood and tolerance.

—– Everything is spinning in the universe, from the atoms to the solar system to the blood circulating in the body. Sema is a spiritual journey towards God, a worship where the soul matures and reaches unity. After this journey, he returns to his life and to serve humanity.

—– In convents, neyzen, kudumzen, naathan and ayinhans form the musical group called “mutrip”. Semahane is located in front of the mutryphane. There is a sheikh’s skin right across the entrance to the Semahane. To the line assumed to be between the post and the input

It is called “Hatt-ı Istiva”. This is the shortest path to unity that reaches the truth. No one other than the sheikh can step on this line during the ritual. Sheikh represents Mevlana. Post is the greatest spiritual authority. With its red color, it represents birth and existence.
Sema consists of seven parts.

After the mutrıp, whirling dervishes and then the sheikh take their places on the post, the naathan reads “Naat-ı şerif”. With this piece composed by Itri, Hz. Mohammed is praised.

After the Naat of Chapter 2
, the sound of kudum is heard, representing the command “Kün” (“Be”).

Chapter 3
Then the ney taksim starts. Ney represents the giving of soul to the universe.

After the 5th Episode, Devr
-i Veled, the sheikh, who took his place in the post, meets with the whirling dervishes who take off their cardigans at the beginning of the first salute of the ritual, and the whirling dervishes enter the sema. This represents birth to humanity. Whirling dervish wears a special outfit that represents the death of his soul. The coin represents the tombstone, the cardigan the tomb, and the tennure the shroud. Whirling dervish enters the square with his hands crossed on his shoulders. In this state, it resembles an elif and bears witness to the unity of God. After starting the sema, he opens his arms to both sides with the right hand facing up and the left hand facing down. This is “We take from the truth and scatter to the people, we don’t cost ourselves anything.” It means. Whirling dervishes revolve around their own circles and turn over the square, just as the planets revolve around both their own circles and the sun.

1. Greetings: The sema is a means that brings people to the real existence, and it is an intoxication of soul. The first phase of the sky is to watch the realms. This is how the greatness and majesty of God is attained. In the first greeting, lovers get rid of doubts and believe in the unity of God.
2. Greeting: The second greeting is to dissolve the whole being in this divine unity.
3. Greeting: In the third greeting, lovers purify themselves and reach the level of “becoming”.
4. Salute: In the fourth salutation, the vuslat of “annihilation” in “being” is attained. In this salutation, the sheikh also enters the sky. In Hatt-ı Istiva, the sheikh who performs whirling in the middle of the whirling dervishes opens the collar of his cardigan with his right hand and holds both ends of his cardigan with his left hand. This means that he opens his heart to everyone.

Sema Show
The sheikh is put on the post with the ney taksim. “Mesrik is also Allah’s, so is magrib. Whichever way you turn, the face of God is there. Because Allah is the Guardian, the Alim.” (The ceremony continues with the recitation of the Qur’an, in which verse 115 of Bakara p.2 is read.

The Mevlevi Sema
Sema ceremony ends with a Fatiha recited for the souls of all prophets, martyrs and all believers, and a prayer for the salvation of our state.

—– “When you enter Sema, you will come out of both worlds; This realm of Sema is outside of both realms.”

If you would like to watch Dervish CEREMONIES please check them out ;